Breeding for muscle and fat

HomeBreeding for muscle and fat

Breeding for muscle and fat

In May 2020 our steer Q119, which had been prepared by Chevalier College, won the Supreme Champion Carcase at the South Coast Beef Association Steer Spectacular with a score of 99%.  The steer featured in The Land under the headline of “near-perfect score“.  Story here, opens in new tab.

After the results of the win at the steer competition were announced, I was asked by a telephone interviewer “What are the secrets of your breeding program”.  My answer “Breed for superior muscle with an adequate fat cover” was simplistic and, in hindsight, very glib.
Of course we do not breed specifically for steer competitions.  We breed stud stock for commercial breeders and we target the criteria that are important to achieve Meat Standards Australia (MSA) premiums. It is a measure of our success in our primary goal that the resulting steers are doing well in competitions.
An important breeding strategy that we find useful is to select the breeding females to suit the farm environment and select bulls that will suit the target market.
Because our farm has a very harsh winter we find that cows need a good fat cover to do well, produce a good calf and go back in calf.  By selecting the best producers of our cows we ended up with a herd with above average fat cover.
Fifteen years ago we decided to breed animals with superior muscle and fat.  At that time, the bloodlines with superior muscle, such as Lindsay Starbright S117, had very little fat cover.  It was generally considered very difficult to breed for fat and muscle.

[NOTE: To explain what we did to improve muscle and fat I will use Breedplan graphs. In the graphs below the light blue lines show carcase weight, eye muscle, fat for rib and rump, retail beef yield and intramuscular fat.]]

We used Starbright and similar sires over our fat cows and this certainly increased the muscling.  However, Starbright was so lean that it was hard to get even average fat in his offspring.  This is seen in the Breedplan graphs below of Starbright, one of our old cows (Phillipa G207) and their predicted offspring. 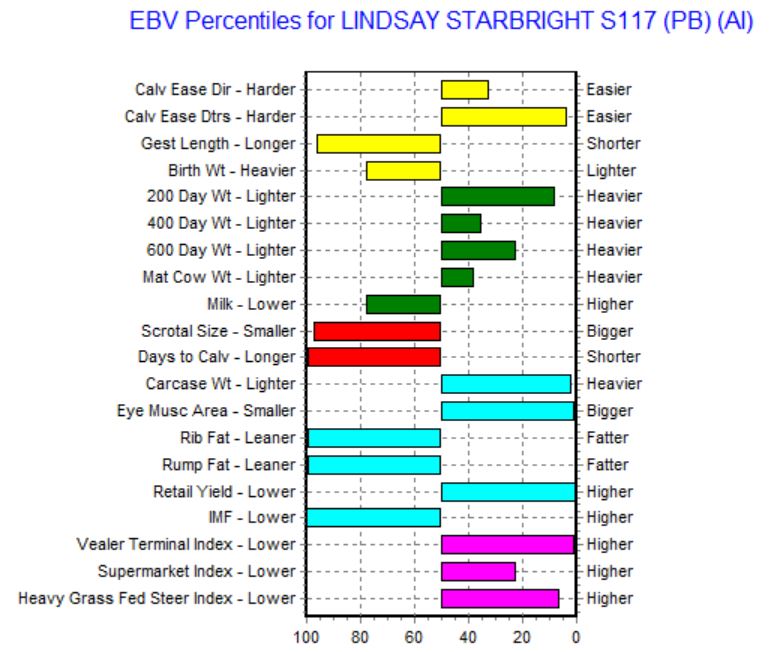 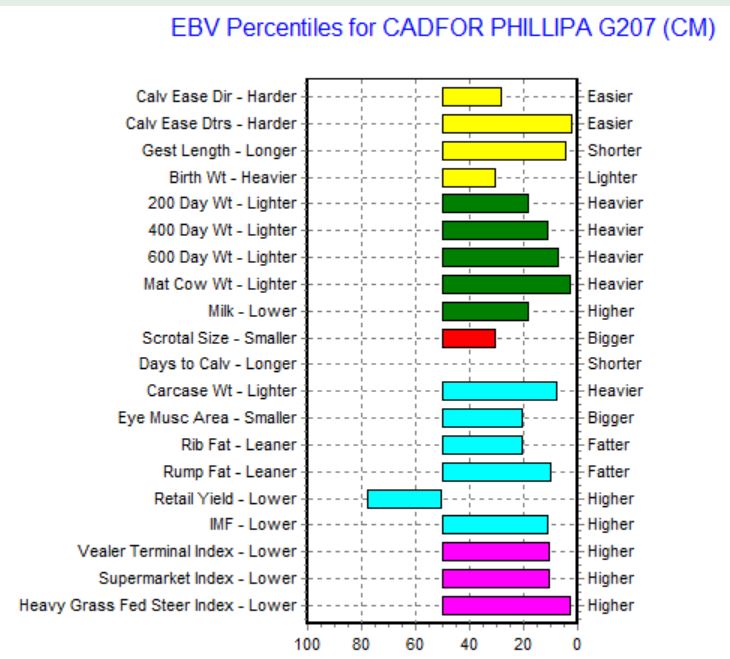 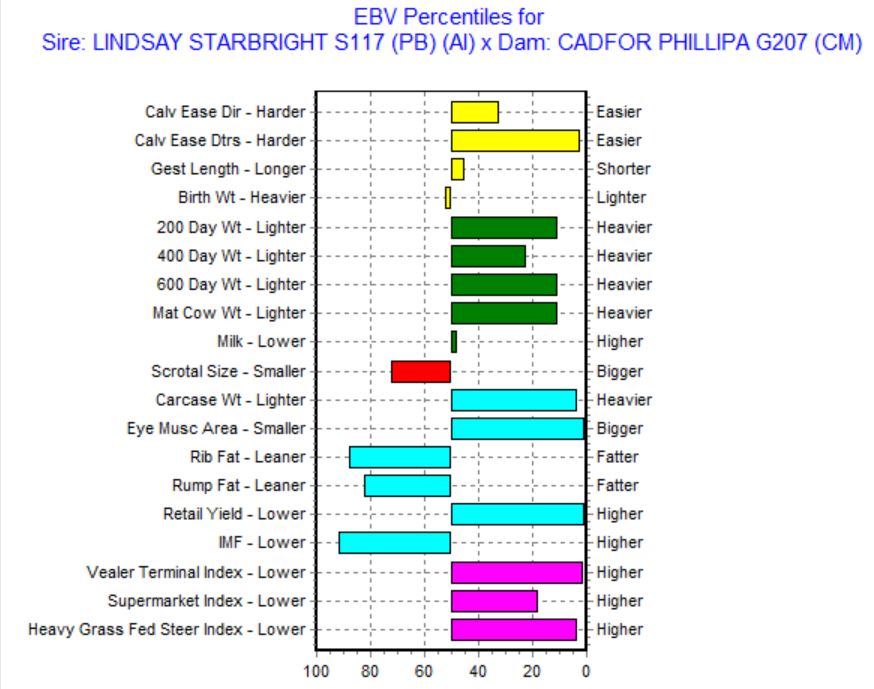 The next step was to find well muscled bulls that were not so lean.  We chose Eylwarra Sands Falcon F33 to improve the muscling of one of our better producers, Cadfor Beroleanne D138 in an embryo transfer program.  This mating produced Cadfor Falcon N2, which we consider to be a very nice example of superior muscle with adequate fat.  See Breedplan graphs below. 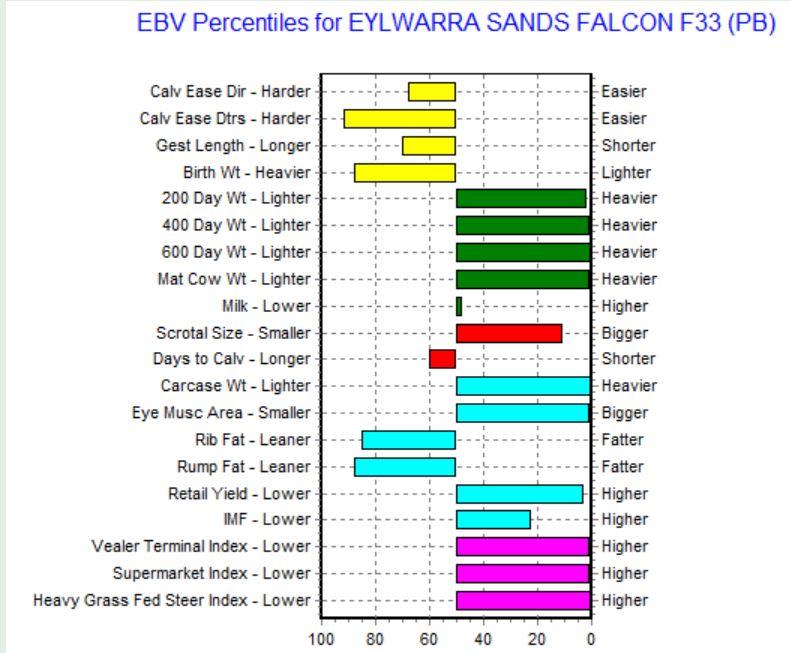 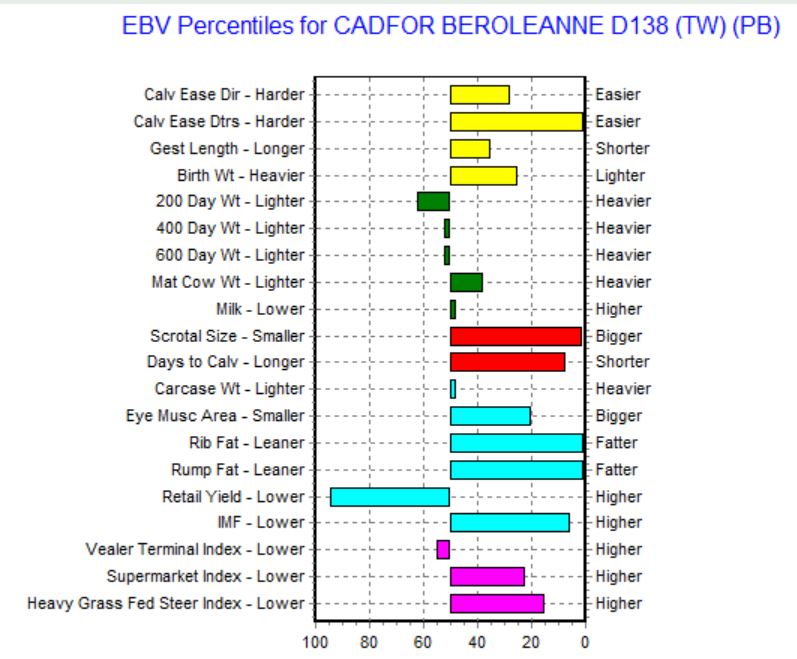 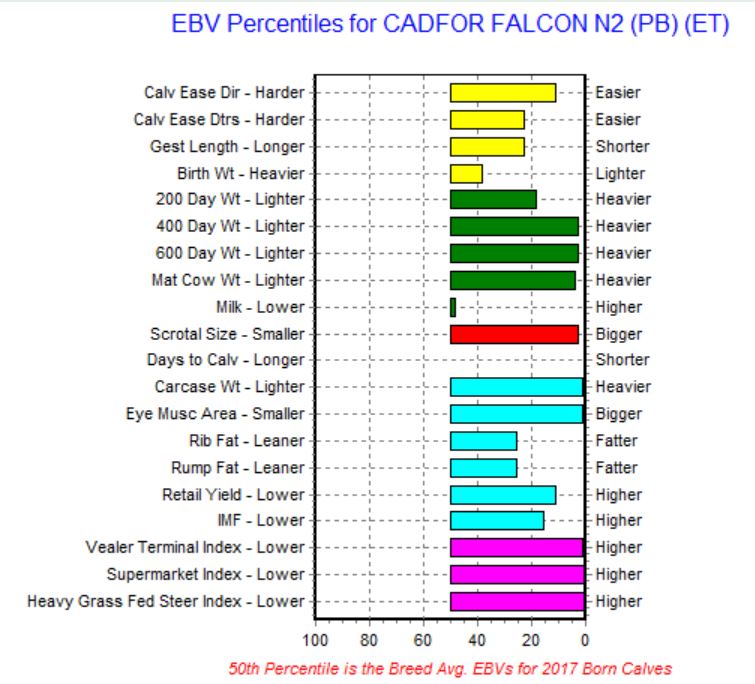 Cadfor Falcon N2 is now our main joining sire and, when joined to the oldest cow in the herd, Cadfor Annette F178, produced the steer Q119, who won at the School Spectacular.  We did not scan Q119 but Breedplan predicted the graph below.

We have bred some very nice bulls in the subsequent calf drops.  An example below is Cadfor Remedy R108.  He is by Cadfor Falcon N2 and out of Cadfor Linda M339.  He had excellent muscle and fat on his scans in July 2021 and now ranks in the top 1% for the Murray Grey breed for eye muscle and in the top 5% for rib and rump fat.  As seen in the photograph below, R108 exhibits excellent shape and softness.  R108 has excellent temperament, low birthweight and superior calving ease.  We feel that, 15 years on, we have now achieved our objective of breeding muscle with adequate fat cover without losing the temperament and easy calving that our herd has become known for.